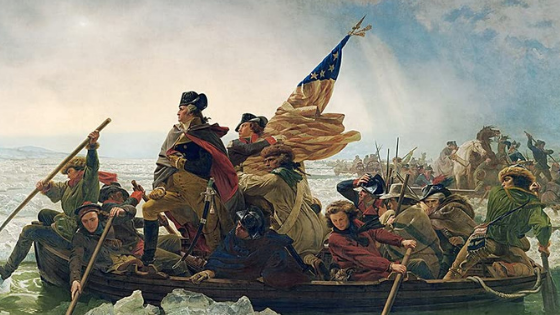 Washington as he crosses a different river than the one I describe below.

Sometimes the best thing you can do is live to fight another day.

On August 29th, 1776, General Washington’s colonial army was in a terrible place. His forces divided by the East River between Brooklyn and Manhattan, General Howe’s British Army was far superior in numbers and training and was bearing down on them. If not for a stiff, few-days-long headwind, British warships would already have sailed up the East River, divided Washington’s forces and defeated them, ending the War for Independence before it really began. Realizing the peril of their position, Washington ordered an incredibly risky, all-or-nothing secret retreat across the East River by night. He commandeered all available boats. He ordered a night attack on a British position to confuse the enemy. Under cover of darkness at around 11pm, the retreat was ordered to begin. Rain and heavy winds delayed the effort, until finally the rain stopped and troops began their silent transport across the river (speaking, even coughing, was forbidden).

To move so large a body of troops, with all their necessary appendages, across a river full a mile wide, with a rapid current, in face of a victorious well-disciplined army three times as numerous and a fleet capable of stopping the navigation so that not one boat could have passed over, seemed to present most formidable circumstances.

In spite of the winds and the challenges of moving thousands of troops and tons of gear across the river, the retreat continued apace. Still, it was moving far too slowly. Under cover of night, this daring move might succeed. Once dawn broke, the game would be up and the British, already far superior in numbers, would decimate the remaining thousands of troops in Brooklyn. There was nothing to be done except to continue the retreat, and yet:

incredibly, circumstances – fate, luck, Providence, the hand of God as would be said so often – intervened. Just at daybreak a heavy fog settled in over the whole of Brooklyn, concealing everything no less than had the night. It was a fog so thick, remembered a soldier, that one “could scarcely discern a man at six yards distance.” Even with the sun up, the fog remained as dense as ever, while on the [safe] side of the river there was no fog at all (McCullough, 1776, p. 191).

Washington’s army narrowly escaped, the fight continued, and of course the Yankees outlasted the British and won their independence.

Of the options presented – “fate, luck, Providence, the hand of God” – I am certain it was the latter two. Apart from winning the war, America would not have happened. And almost everyone reading this is a citizen of this amazing country and a beneficiary of it in countless ways.

But make no mistake, with all of our historical flaws and injustices (we all know there are grievous ones), it is an amazing blessing to live here.

It is a tremendous blessing to live in America. Strangely, this is a controversial statement today. But make no mistake, with all of our historical flaws and injustices (we all know there are grievous ones), it is an amazing blessing to live here. You may hear that America is incorrigibly racist, that our system is so corrupt that we need to topple it, that there is a plague of injustice from sea to shining sea. Don’t believe it. People vote with their feet. And there are hundreds of millions of feet that would rather live here than anywhere else. There is a reason why America is the #1 place in the world people want to live (and it is not even remotely close). Opportunity exists in our nation for all different kinds of people in a way that simply has not existed in any other republic in world history and does not exist in any other country today. No, there is not perfect equality of opportunity (for that one would need to move to Utopia). But if oppression and injustice and systemic evil reigned supreme in America, why would so many want to migrate here so badly?

Again, this is not to say that there are not concrete, specific ways to improve equality of opportunity in America. Surely there are, and our work in Linden to serve and love (and learn and grow) is one small expression of a Gospel-driven mission to help young people especially to have more opportunities to flourish than they currently have. And we are able to do this because of the resources and blessings of living here.

We do not worship our nation, nor do we look at it with rose-colored glasses. Nations are a drop in the bucket (Isaiah 40:15) compared with our infinite, omnipotent, omniscient, merciful God. But we should give thanks to God for all of the blessings He has lavished upon us. And make no mistake, one of those blessings is the nation in which we live.

This weekend, as you enjoy a parade, some fireworks, and a burger (not to mention outdoor worship on the 4th!), give thanks to God for our nation. It is flawed, but less flawed than any other that has ever existed.